No replies to this topic

LONDON— Citigroup Inc. and J.P. Morgan Chase & Co. agreed to pay more than $1 billion each to resolve allegations that they tried for years to manipulate the foreign-currency market, the biggest fines wrung from a group of six banks by regulators in the U.S., U.K. and Switzerland.

Settlements on Wednesday with banks on both sides of the Atlantic were expected after long investigations, but Barclays PLC surprised investors by pulling out of late-stage negotiations with U.S. and U.K. officials at the last minute. In another unexpected turn, the U.K.’s Financial Conduct Authority told Deutsche Bank AG that it was no longer under investigation by the agency.

The pacts, totaling about $4.3 billion, indicate that the banks were engaged in activities designed to boost their profits by moving one of the world’s largest and most interconnected markets, sometimes at the expense of clients. Some bank employees blew the whistle on the behavior years ago, but the misconduct persisted until 2013, after banks were punished for trying to manipulate other financial benchmarks. 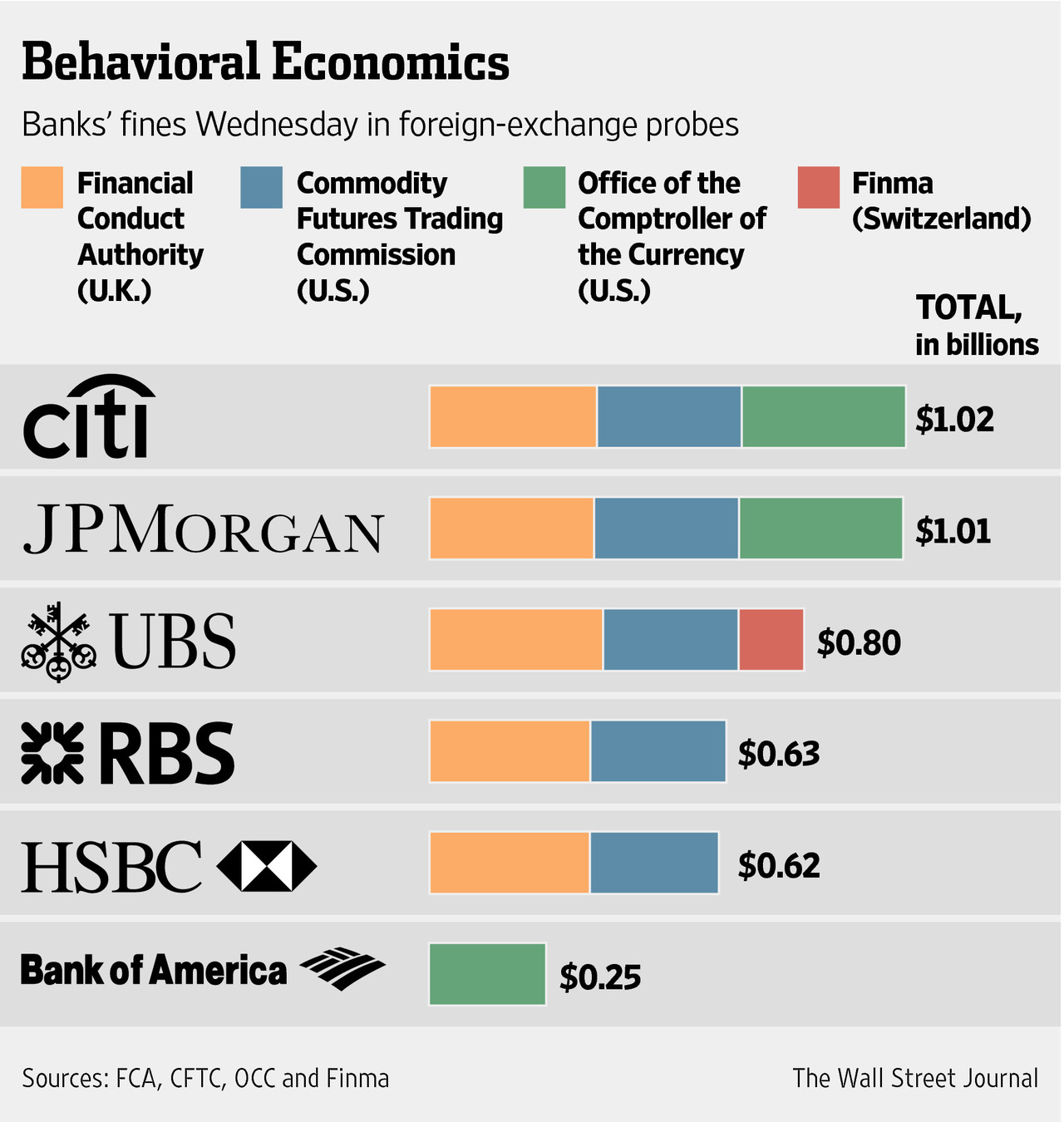 Improprieties in the $5.3-trillion-a-day foreign-exchange market have the potential to touch broad swaths of the public. Every time companies or individuals do business in a foreign currency, they are subject to the whims of a market that regulators said has been rife with misconduct by a group of bank traders.

In addition to tarnishing the reputation of the banking industry, the episode reflects poorly on the Bank of England. The central bank on Wednesday released documents showing a senior official, Martin Mallett, knew about attempted currencies manipulation for years but failed to stop it. Mr. Mallett, who was fired Tuesday, had close ties to some of the foreign-exchange traders who were involved in what regulators and the banks describe as misconduct.

The settlements are the latest in a series of financial penalties against banks. Globally, lenders have racked up more than $200 billion in penalties in recent years stemming from investigations into misconduct such as interest-rate manipulation, sanctions violations and improperly selling a variety of financial products.

In addition to Citigroup and J.P. Morgan, the FCA and U.S. Commodity Futures Trading Commission reached settlements withHSBC Holdings PLC, Royal Bank of Scotland Group PLC and UBS AG . The CFTC settlement was for a total of about $1.4 billion, while theFCA portion was £1.1 billion ($1.75 billion). The Office of the Comptroller of the Currency, a U.S. bank regulator, fined Citigroup, J.P. Morgan and Bank of America Corp. a total of $950 million.

Barclays said it had considered a settlement on similar terms to those announced Wednesday, but it had decided to seek a “more general coordinated settlement.”

More penalties are likely, and it isn’t clear which banks will ultimately pay the most. The Federal Reserve said Wednesday that it is continuing its investigation. The Justice Department and New York’s financial regulator weren’t part of Wednesday’s settlements, but have been conducting preliminary negotiations with some banks, according to people familiar with the matter.

The big hits taken by Citigroup and J.P. Morgan were driven in part by which regulators decided to announce deals on Wednesday. Unlike the European banks, they also were fined by the OCC.

A dozen banks already have fired or suspended about 30 traders and other employees in connection with the foreign-exchange probes.

In a meeting in Washington last week with Justice Department officials, representatives of J.P. Morgan argued for leniency, and other banks have held similar meetings, the people said. The Justice Department has given some banks until mid-December to submit a full accounting of their foreign-exchange misconduct, they said.

The CFTC and FCA laid out what they said were wide-ranging and long-running efforts by some of the world’s biggest currencies-dealing banks to put their own interests ahead of those of clients, sometimes endangering the market’s integrity.

The misconduct fell into at least three camps, the regulators said. Working as a pack, banks tried to manipulate a currencies benchmark that is widely used to set foreign-exchange rates across the industry and asset classes. The banks attempted to trigger stop-loss orders with clients in a way to goose the banks’ trading profits, regulators said. A stop-loss order is placed with a broker to sell or buy a security when it reaches a certain price.

"Remember that if you practice strict money management rules, you will become the casino and in the long run, "you will always win."

"If you have ever watched one  of the nature programs  on television  about how many species of fish hunt, you may  have seen  the larger fish that create "bait balls"  by coralling  smaller fish into a tight group."

Money moves the market, not an indicator.

Back to Discutii generale


0 user(s) are reading this topic